Experience New York City like a local. Expert tips on where to eat, what to see and do in a weekend or layover.

Built in 1908 for sailors docking in Manhattan, the Jane Hotel offers historic, cabin-like berths for single and double occupancy.

The overall vibe marries Victorian and Ottoman stylings–with a nod to the cult of Wes Anderson–as porters run luggage to and fro, dressed in bellhop uniforms and Fez caps. The walls are ornamented with antique wood molding and portraits and paintings from the Orient hang alongside gypsy folk art and a stuffed monkey and other trophy heads that include, if I’m remembering clearly, a peacock. The Jane is also notable as having hosted survivors of the Titanic in 1912. At night, the lounge comes to life in quasi-Gatsby delight where hipsters rub shoulders with entrepreneurs and socialites over cocktails.

You may ask yourself  “Is this the Grand Budapest Hotel?”

*Truth is, single and doubles are tiny. But, there’s absolutely no reason that should be a problem–you’re in NYC, hit the streets ASAP. And those prices!

I suggest pairing an espresso with pain au chocolat and the baked eggs. If you’re in a hurry, opt for the breakfast smoothie to go.

*Best of all?  Their no-bullshit policy on prohibiting the use of laptops.

I’ve said a lot about the Highline in the past, have strolled its verdent lanes time and time again, yet it never grows old. In fact, it grows anew as more platforms are dedicated to the city park.

Think of it as a pedestrian bridge that runs North and South across the West Village and the Meatpacking district. A collected respite from the madness below with a near dystopian vibe for much of the reclaimed Highline has been build to incorporate the original rail lines which ran trains for centuries. Now, they’re grown over wild a healthy helping of local flora and an array of birds and bees and butterflies. The skyline is just wild from up here.

Highlight: Ice cream sandwiches, buskers, street art, people watching, bars below, bars above. Strictly pedestrian and a great fountain made to walk through, take off them kicks and splash around! 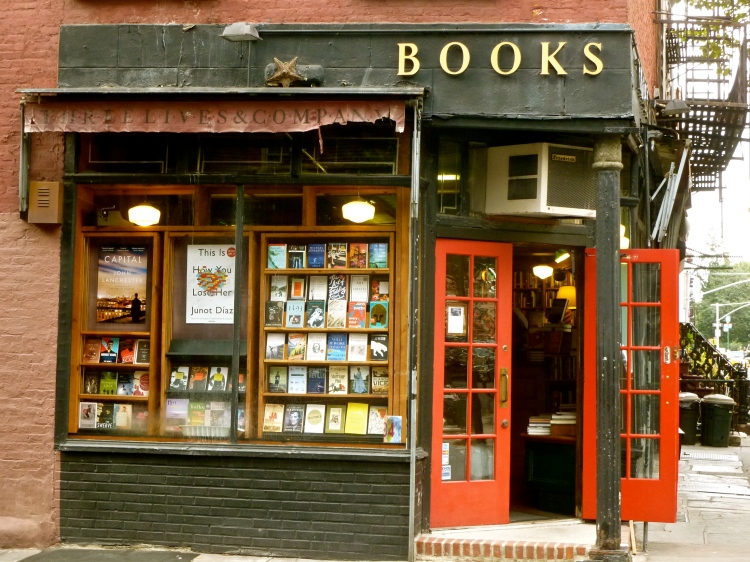 Some say local bookstores are a relic of the past. I say they’re just getting started. I mean, it wasn’t even that long ago that printed books were hard to come by, let alone afford. The players are just warming up, if not off to a weary start. Heads up. For we have our heroes.

Three Lives and Co. is nothing less than a ship of bibliophiles. Employees know their shit, as in they don’t just casually read the bestsellers, they inhale, they ingest every phrase, every line, every book with deep rooted passions for the written word so that when a wayward wanderer (yours truly) goes in search of some fabled memoir, they have not only read the book, each one of them, but they can happily assist in finding a similar read.

Host to a curated collection of books and boutique zines since 1968, like the AMNH, you could spend days inside.

New York, like all my favorite cities, is known for an endless arsenal of cubbies, of hole-in-the-wall establishments with more charm than any desperate big box shop can buy.

Virgola is just that, a cubby hole oyster and prosecco bar. Menu boasts cheese plates, meat plates, salads, caviar and other articles of the sea.

We ended up with a 9 oyster varieties a piece, each more succulent than the last… or maybe that was the prosecco talking?

Flights of oysters, flights of fancy, whatever your poison. Live it.

Happy-hour from 4pm to 7pm

Joseph Leonard is one of those restaurants that you will take with you. That you will think about time and again and that you never fail to recommend. I generally avoid visiting the same place twice when traveling, at least in the realm of food, but I recently had my third meal here and they keep getting better. No trip to NYC can be complete without a meal at Joseph Leonard.

Always on point with a strong seasonal menu ranging from wild caught fish to hearty vegetarian entrees, and NY strips to the artisan cheese plates and craft cocktails and house made pickles, sat out at every table. The oyster menu is always fresh.

After dark candles are lit and lights are dimmed. With a central bar at ground level and the kitchen being a few steps up, the small restaurant feels even more intimate when seated. Try for a window seat towards the back.

*Joseph Leonard does not accept reservations. So arrive a little early. Worst case scenario, you’ll wait at the bar, have a few cocktails, waiting for a table to free. Or, eat at the bar.

What began in 2009 as an ice cream truck has grown to two permanent parlors (with more to come). The menu offers cones, shakes and floats incorporating  experimental flavors that anyone can enjoy. Featured on many top-tens, best of, and best in the world lists, Big Gay’s has quickly become a NY staple and an absolute must all ice cream loving humans.

Try the Salty Pimp (dulce de leche, sea salt, vanilla ice cream in a cone dunked in chocolate) or as Thanksgiving rears its head in the US, the Gobbler (pumpkin butter, maple syrup, pie pieces and whipped cream, all in one cone!)

Here’s a little secret — do not, under any circumstance, eat inside — you WILL succumb to seconds, and thirds… ad nauseam. What you want to do is order your ice cream then use this time to stroll the beats of Washington Square. Hit the streets where Bohemia has once again settled in…

Mark Twain and Robert Louis Stevenson shot the shit here. This is where you and that Big Gay load of cream will mingle with the night. Could be to the tune of some vagabonding gypsy quartet, could be a tearjerking talented  junkie who’s future shines like a dwarf planet never to spark the mainstream but you know you have found solid gold if only for a moment. This is New York City. This is the heart. Where everyone is someone and in that the maddening chaos that it could be flows like poetry.

“A marsh. A cemetery. A parade ground. A gathering spot for avant-garde artists. A battleground for chess enthusiasts. A playground for canines and children. Washington Square Park has served various roles for its community throughout the years, adapting to meet its needs. Well-known for its arch, honoring George Washington, the man for whom the park is named, and its fountain, the arch’s elder by 43 years and a popular meeting spot, Washington Square Park also houses several other monuments and facilities.”

Hauntingly, or not, around 20,000 bodies of victims of early America rest under the concrete park

Now. For me, the best dessert would be to skip the Ice Cream and pick up a bottle wine, maybe some cheese and nuts and head straight for Wash. Square Park after dinner to watch the scene unfold. I’ve seen lightsaber duels, impromptu dance demonstrations and raging jazz bands horning and howling out familiar tunes that you just can’t name. Hula hoopers and tricksters are not unheard of.

For an added bonus–after Washington Square Park, if you’re feeling wild, restless, if this city life has gripped your core, hail a cab to Times Square. Wander the streets starstruck, high on the nighttime New York.

One thought on “New York City in 24 Hours: Where to Eat. Sleep.”