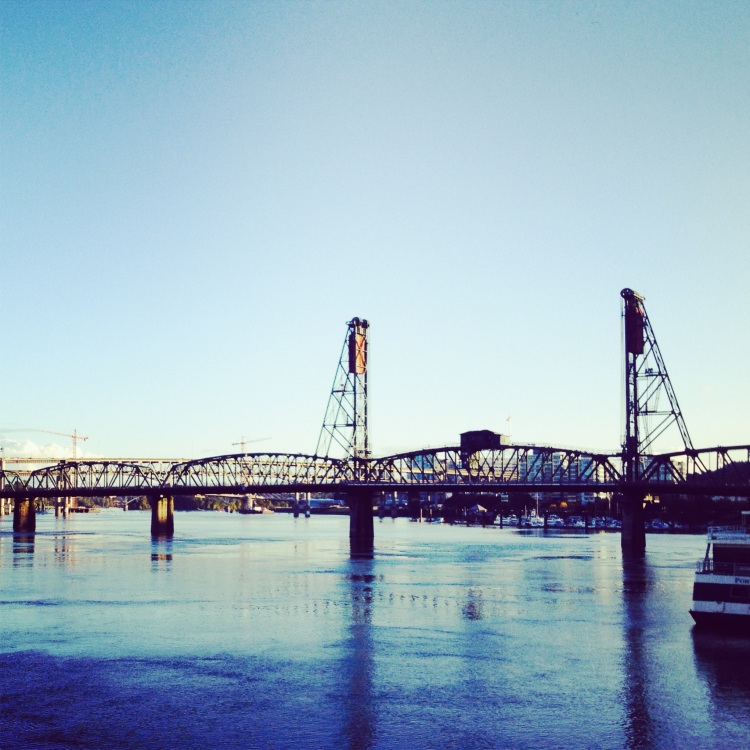 Landing on “best of” lists every day across the globe Portland, despite it’s relatively small population, has created it’s very own, unconventional, holistic brand of society. A fusing of localism and sustainability placing PDX as the greenest city in the U.S.

For me, PDX has just recently stepped out of the colossal shadow of Seattle. It wasn’t until Jaclyn’s sister and brother-in-law moved to Portland that my interest in the Pacific Northwest was even stirred, what the hell was wrong with me you might ask? IDK… IDK… But I can say that it wasn’t long before I fell in love with the “City of Roses” through the countless blogs I read. And when we received the invite to visit I sharpied out the dates in my calendar with fervor.

Though we had several months to prepare I took the hands off approach, knowing that our hosts would also act as our guides. So we dove in seeking the greatest in local eats, swanky bars, and boutique shops.

Sure, pizza may have become the most common food on this planet but I can’t camouflage my excitement for these most ancient pies.

Further more, when a pizzeria has the guts to pair a fatty “Meat Lover’s” style pizza next to the vegan “New Maps Out of Hell”, loaded with cashew spread and hash browns, credit is due. The ancients of Gaeta (the first example of what we know as pizza came from this Italian city in the early Middle Ages) have nothing on Sizzle Pie.

A noteworthy collection of tunes rest in the juke box waiting to be paired with a local beer and one of these unorthodox pies. Gluten-free, vegan, vegetarian, full meat carnage, they’ve gone wild with their imaginations.

In the words of Sizzle Pie, “Death to False Pizza”

When you visit a city known for its foodie movement and eat at the same restaurant twice during the same stay you’re either A) a closet case unwilling to branch out, or B) you’ve stumbled upon Fireside. It’s primitive, romantic and hip but not trendy.

Their environment and menu is “outdoor inspired” and in the open air restaurant, seated by one of the various fire pits, chowing on dishes like “brick chicken” or “fireside elk chili” you begin to feel it too, the call of the wild.

The menu runs the gamut with fried chickpeas , carrot and beat chips with harissa, an expertly crafted cheese plate and (my personal favorite) a farro salad topped with pickled onions, goat gouda, and a damn fried duck egg. YES.

Distracted by a sweet list of libations, including local wines and experimental cocktails, I completely missed dessert! 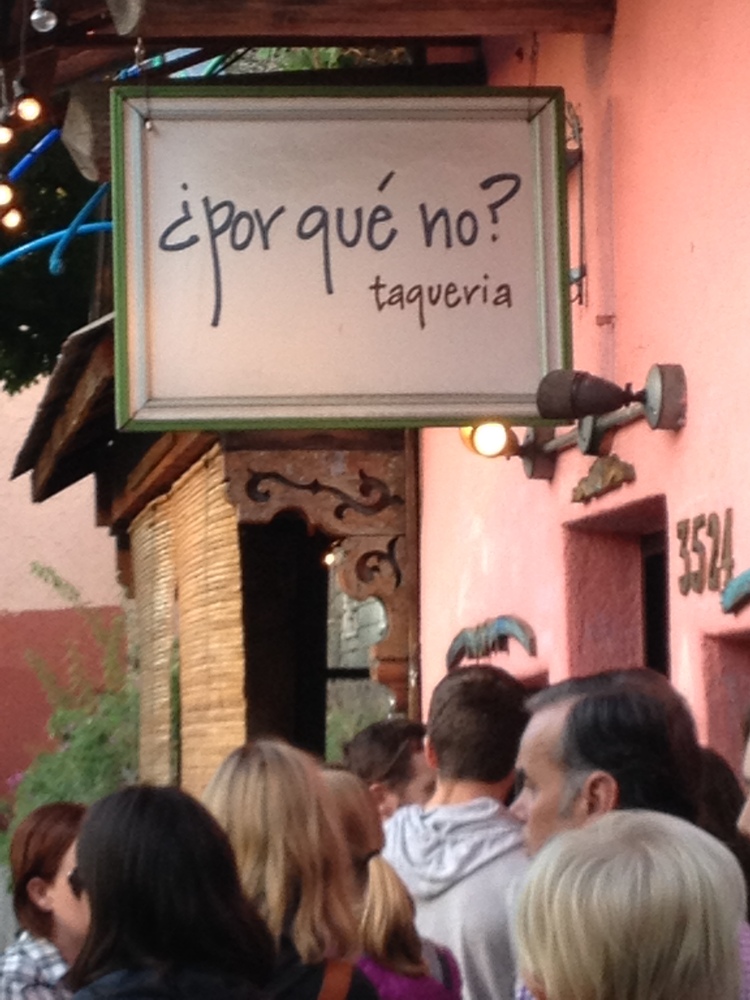 Ok, so I didn’t get the chance to hit up any of the food carts. Despite Portland having 300+ mobile kitchens it simply didn’t work out. Yet, I had the experience of waiting in a line that wound from the cash register (indoors) out the building and around the block, a 30 minute endeavor which paid off with the absolute best tacos I’ve had outside of Mexico.

While in line a waitress takes your drink order, go for the Horchata Borracha (i.e. “rum-chata”). Grab one of these or another of their experimental margaritas and that line won’t feel so long after all.

The establishment itself (talking the Mississippi Street location) has a cozy intimate feel. A modern shack with a festive West Mexico Pacifico vibe.

Appetizers include spicy cucumbers and ceviche. Should I even bother mentioning their ethical drive to use local line-caught fish or the fact that they used repurposed materials in the remodeling of their cookhouse? That’s Portland for you.

The centerpiece of their menu would have to be the exceptional taco list. It takes balls to throw wild caught squid on a taco and top it with peppers, salsa roja, and fresh crema mexicana but they do it and do it well. Hands down most delicious taco I’ve come across to date! A close second being their camarones (shrimp) taco, spiced up with a little cabbage, pineapple and salsa verde.

The presentation alone is enough to fill ones appetite.

And, to rub it in your face, what should be an award-winning salsa bar.

A “Farm-to-cone” ice cream shop with, you know, the typical flavors such as arbequina olive oil and the usual mint and sea urchin meringues. 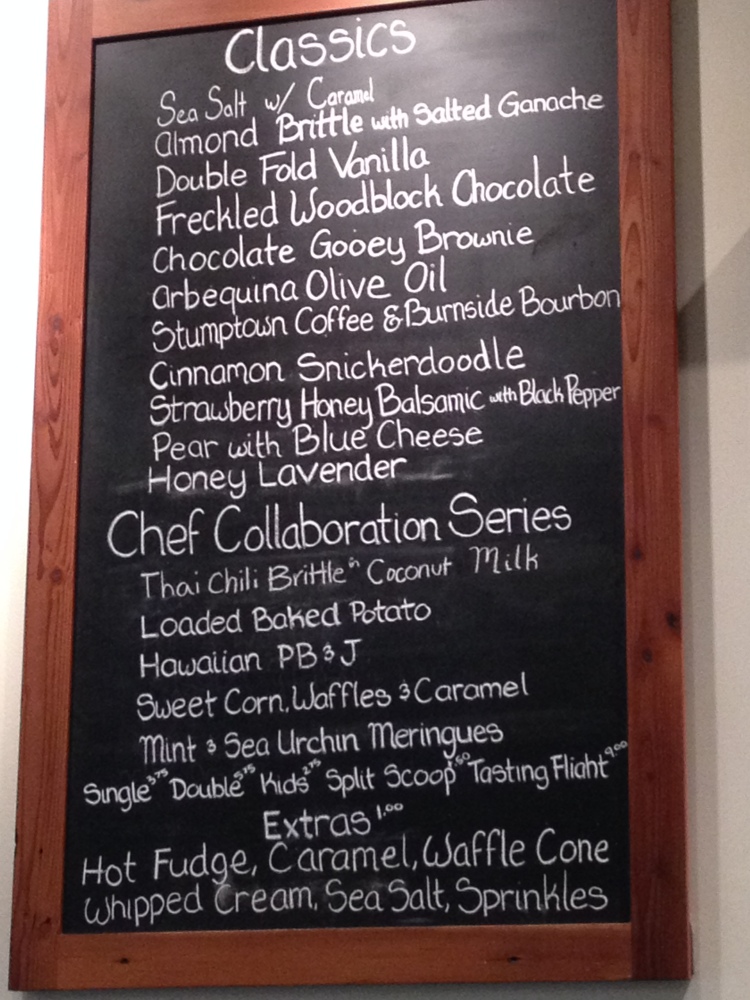 Cones, coffees, and teas come in all sorts and pairings with speciality items rotating along with the seasons.

Of all the options, olive oil held its own against their gathering of flavors. The sea urchin with mint, left us refreshed with the beloved sweet/salty combination. Honey lavender has become a solid standard of mine, which I’m happy to see more frequently.

If you’re in a hurry they also offer cartons to go, in which case, they’ll allow you to bypass the monstrous line you’ll probably be stuck in..

Of all the cafes we visited The Clearing stood out as the most inviting/scrumptious with a menu offering everything from breakfast burritos to fresh pastries and peanut butter and jelly sandwiches. Combine that with a killer list of holistic smoothies and you’re feeling good. The beauty is in their simplicity. They’re not curling their mustaches, taking scientific measurements to make a cup of joe. No, they’re crafting unbelievable pastries and damn good light fare.

With a running service of over 100 years they’ve survived prohibition, the Great Depression and Y2K. Hosting a menu that offers breakfast until 3:00pm, this gastropub will satisfy any appetite at any hour. Check out the craft cocktails, local-seasonal bites, and the best Bloody Mary i’ve downed.

I could just let the name speak for itself, then again, it’s so much more. Named one of the top 55 Bourbon bars in America, The Pope House offers an always changing collection of bourbons, whiskeys, and other spirits.

Check out their “Bourbon Derby”. Participants take off in a quest to sample 50 of their prized bourbons, at which time they’re awarded with a trophy along with other prizes. The bar has a cozy old-world vibe that’s just right for a night-cap.

Portland offers a lifetime of dining options, which I’m currently filtering through now, ready to return to raid the food carts, the bourbon bars, and creameries.

I’d love to get some feedback on your experiences in Portland, or anywhere else in this vast world you’ve come across some noteworthy eats. Be it Cairo, Austin, or Rome, Georgia, I’m always looking for a little inspiration to hit the road!